Design cycles faster and faster these days. See the New York Times for Flash in the Can: Designs Soon Forgotten. If you have a wall for of antlers or resin deer heads, trade it in quick, or be as hip as a proud owner of a Michael Graves teapot in the supermodern era.

Which begs the question, how can architecture continue to avoid fashion? To be sure, there are mini-fashions, but the blob remains with us a decade after its rightful death. And what is parametric design, after all, then the newest version of Bucky-Fuller-speak? Has architecture even caught up with what I wrote about fashion back in 2001? Maybe instead of less fashion, we need more fashion? I’d love to hear your thoughts on this…

Time for yet another gratuitous post to plug Blue Monday. This go around, since some of you have asked about the typeface, I thought I should post a link to Section, a typeface designed by Greg Lindy of the Village Collective. Although ACTAR chose the face, it seems rather apt, given that AUDC’s base at the time was L. A.:

Section was designed specifically as the identity font for Intersection
Studio, a multidisciplinary design firm in Los Angeles. The goal was
to create a flexible, yet distinctive and legible font. Section’s
application involved everything from business forms to collateral
material. This font was a key element in establishing the Intersection
Studio brand. It is suitable for text as well as display. Eurostile and
News gothic served as reference in the creation of Section.

The New York Times carries a brief review of a show at the Cooper-Hewitt, "Design for the Other 90%," which the Times refigures as "Design for the World's Poor." To be fair, I haven't seen the show, but the web site generally corroborates the Times review. Both suggest that the focus is on how designers can help the world's poor. I realize that the Cooper-Hewitt is the National Design Museum and, by its very mission, has to maintain an inordinate faith in the capacities of design (take a visit to their online store for another view), but I wonder where the Architecture Without Architects of this kind of culture is? Where is a show on the kind of work being shown on Afrigadget? Not to knock the well-meaning efforts of designers (I'd rather they design for the developing world than for the museum store) but I'd rather see a common ground established between the kind of things in Make Magazine and Afrigadget than to hear yet again about how first world ingenuity solves third world problems.

But again, I haven't seen the show and perhaps I am just being led astray.

“What kind of society is it when you can’t even buy a chair?” asks Donald Judd in “It’s Hard to Find a Good Lamp” at Icon Magazine. While the Icon bills this as “Donald Judd gets grumpy about furniture from beyond the grave” (hence this as the second grumpy post of the day), it’s really not fair to call this grumpy. Judd has a point.

A pathetic idea of expression debilitates virtually every aspect of our lives. Why can’t designers, especially second-rate designers (which is most of them) simply leave well enough alone? Once I have an option of a decent chair for not much money, then I can go for a nutty chair.

There’s this strange idea out there that we have to meddle with everything. Stop! Enough already. Take the Mac OS. What is it with those stupid three buttons at the top left corner? Why are they rounded? Why are they even there? Two of the three are unecessary. The close button is obvious enough, but the minimize button is annoying to use (much more annoying that windows, which makes it relatively clear which window you have minimized and which doesn’t consume 1/2 as much screen real estate with its relatively sensible bottom bar as the Mac’s ludicrous dock does) and the maximize button is, well, just a mystery. Because of their broken functionality, I barely ever use them. Moreover, why are they round? Why are tho top corners of my windows round when the bottom ones are square? Why this infantile attempt at design? Seriously though, it looks comical. If I’ve compared the Mac OS unfavorably to Windows, rest assured, Windows looks lo awful it’s hard to know where to begin (ok, I know where to begin…with those insane bubbles that unceasingly chat with you at the bottom right of the screen.).

Does anyone seriously think that such feeble attempts at empathy actually engage the user somehow? Or is this somehow a dark leftover of post-Fordism?

If you haven’t read Donald Judd’s writing before, do so now. His punchy, telegraphic style is unique, a delight to read.

I was intrigued to read about the release of the Clocky in today's New York Times. No longer just a cool idea, Clocky is now shipping.

Developed by Gauri Nanda, a graduate student in MIT's media lab, Clocky is an alarm clock that jumps off the night table and runs away from you if you hit your snooze button one time too many, randomly screeching at you with its alarm.. Not only do I need a Clocky (I have two small children after all!), with Clocky I think we see a glimpse of the future of network culture in which our relationships with things become ever more emotional. I'll take the shag one. 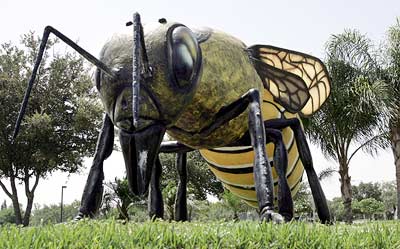 The Economist Magazine looks at "America, the Creative." The lessons of the Creative City and the Bilbao Effect have not been lost on small-town America.

To attract tourists and settlers, small towns are turning to storytelling festivals and giant killer-bee statues. I've seen this first-hand as, over the last quarter century the town I spent my teenage years, Stockbridge, Massachusetts, pioneered this sort of change. The hardware store, then the pharmacy, the grocery and the elementary school disappeared one-by-one as the community refigured itself in the image that resident Norman Rockwell created for it. I still remember the lunatic old ladies from the city asking if we had toilets or outhouses. At some point we become a world of tourists, all looking in vain for just the right place that fits our demented sensibilities.

Robert Fripp and Brian Eno's classic series of recordings””?No Pussyfooting, Evening Star , and more recently The Equatorial Stars are all required listening, and not only for the stunning sound. Both of earlier projects””?over 30 years old by now””?deal with ambiance, distortion noise and feedback, all issues that network architects need to engage with headon.

Also worth noting””?as if anything these two did isn't””?is a manifesto that Fripp wrote that could still be aptly used by the NetLab, available here as well as Eno's Oblique Strategies, a set of cards that could be used, like the i Ching, to break through everyday impasses. These can be found for as a widget or application for the Mac or as an application for your Palm-based PDA.

The NetLab's first studio at Columbia's GSAPP concludes this Friday with an exhibit in 200 Buell Hall from 12-6. Students will be presenting pamphlets they have designed. The topic of the research studio was to explore a logistical network in considerable depth. The studio brief is located here. A roundtable discussion will be held at 4pm followed by a reception. All are welcome.

David Reinfurt of O R G and Dexster Sinister came in to talk to my seminar on the Architecture Machine Group today to discuss his work with the Center for Advanced Visual Studies at MIT and his research on designer Muriel Cooper, the first designer for MIT press and the Founder of the Visible Language Workshop at the MIT Media Lab. Cooper is responsible for the MIT Logo as well as for the first edition of Learning for Las Vegas among many other projects. All of the preceding links go to David's work and are well worth following up.

ACTAR is launching its New York office on Thursday the 16th, from 6.30 to 9.30pm at the Van Alen Institute. Come see Blue Monday, AUDC's first book as well as a preview of Infrastructural City: Los Angeles, which I am editing as a co-production of the NetLab and the Los Angeles Forum for Architecture and Urban Design.