“If it is true that the next renaissance of human culture will be the reconstruction of the natural world in our cities and suburbs, then it will be the designers, not the politicians, who will lead this revolution. And plants will be at the center of it all.”
—Thomas Rainer, Planting in a Post-Wild World. 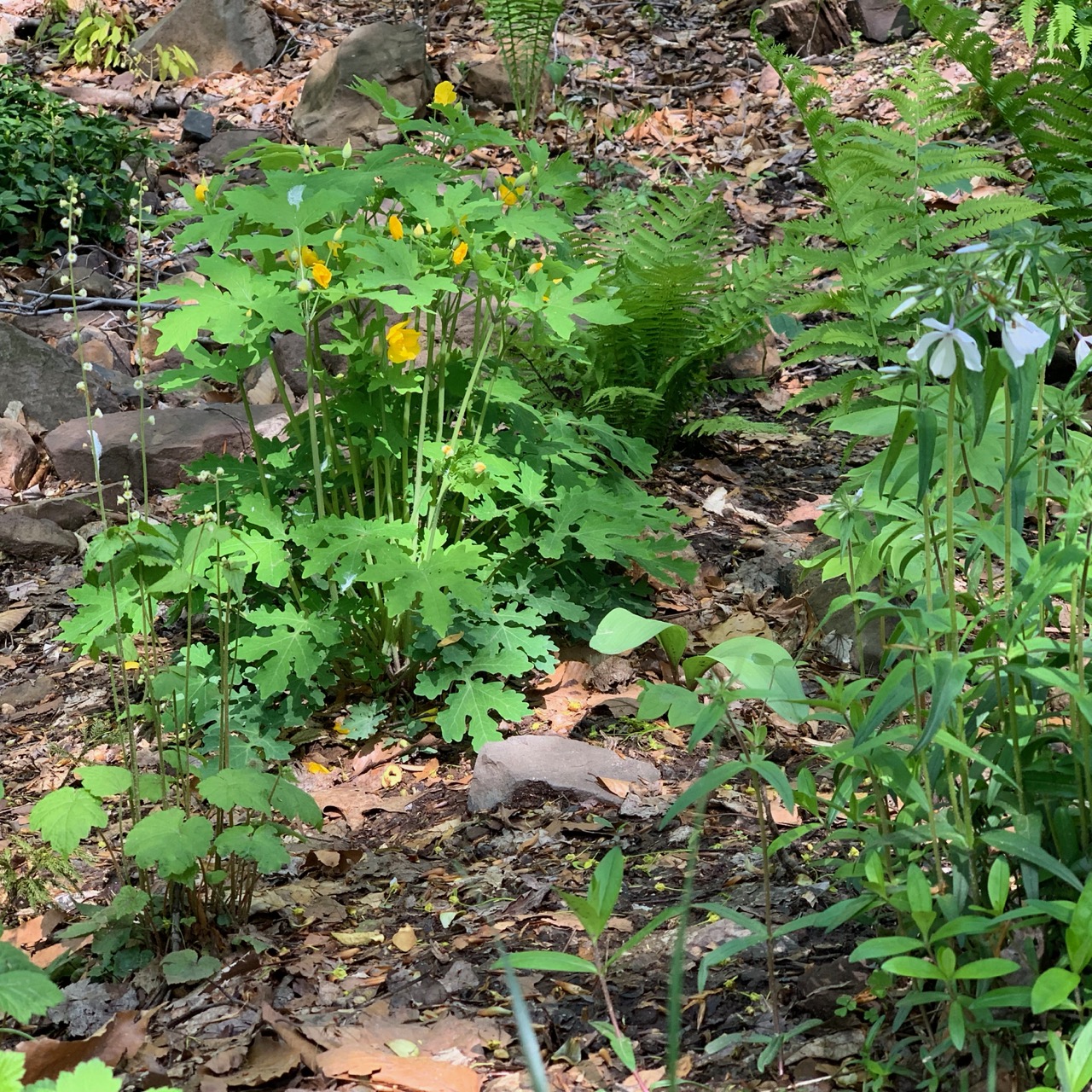 It’s true, I’ve disappeared. It’s time to admit it. Architecture and academics have become boring. There are no new buildings of consequence and academics are plumbing the depths of irrelevance. Star worship killed both.

Few people who knew me in academics knew about my secret life, investing and managing real estate (anyone who ever took my Network City course should have received some good lessons on that) and that panned out well enough that I don’t have to prostitute myself for low-paying academic jobs anymore for the “experience” and “exposure.” There are many things I should do with this freedom: chiefly, proposals for art and museum installations, writing, and my book on the first decade of the Netlab. I am slowly working on all of these, but I found a new secret life, something else that has absorbed me thoroughly, something that I want to do: gardening.

Forget the term “landscape,” a holdover from the days when men wore cargo shorts and baggy T-shirts. Landscape implies finding an earth mover and puttering about with it, treating a plot of land as if it were a building, terracing it without regard to whatever might be living there. Periodically, claims will be made about clever schemes for land reclamation or water filtration but inevitably these will go awry since the designer will have given little thought for the plants and even less for the structure of the soil. Landscape needs a broad area to take into view, which necessitates clear cutting and large expanses, not the minute detail of gardening. Landscape suggests something for a public to view, not something productive for a household. Worst of all, around here, “landscapers” are illiterate madmen with gas-powered leaf blowers, whose sole job is to redistribute wealth into their pockets while driving me out of my goddamned skull. I saw one the other day, “Stone Age Landscapers.” Like something out of a Robert Smithson narrative, the name says it all. 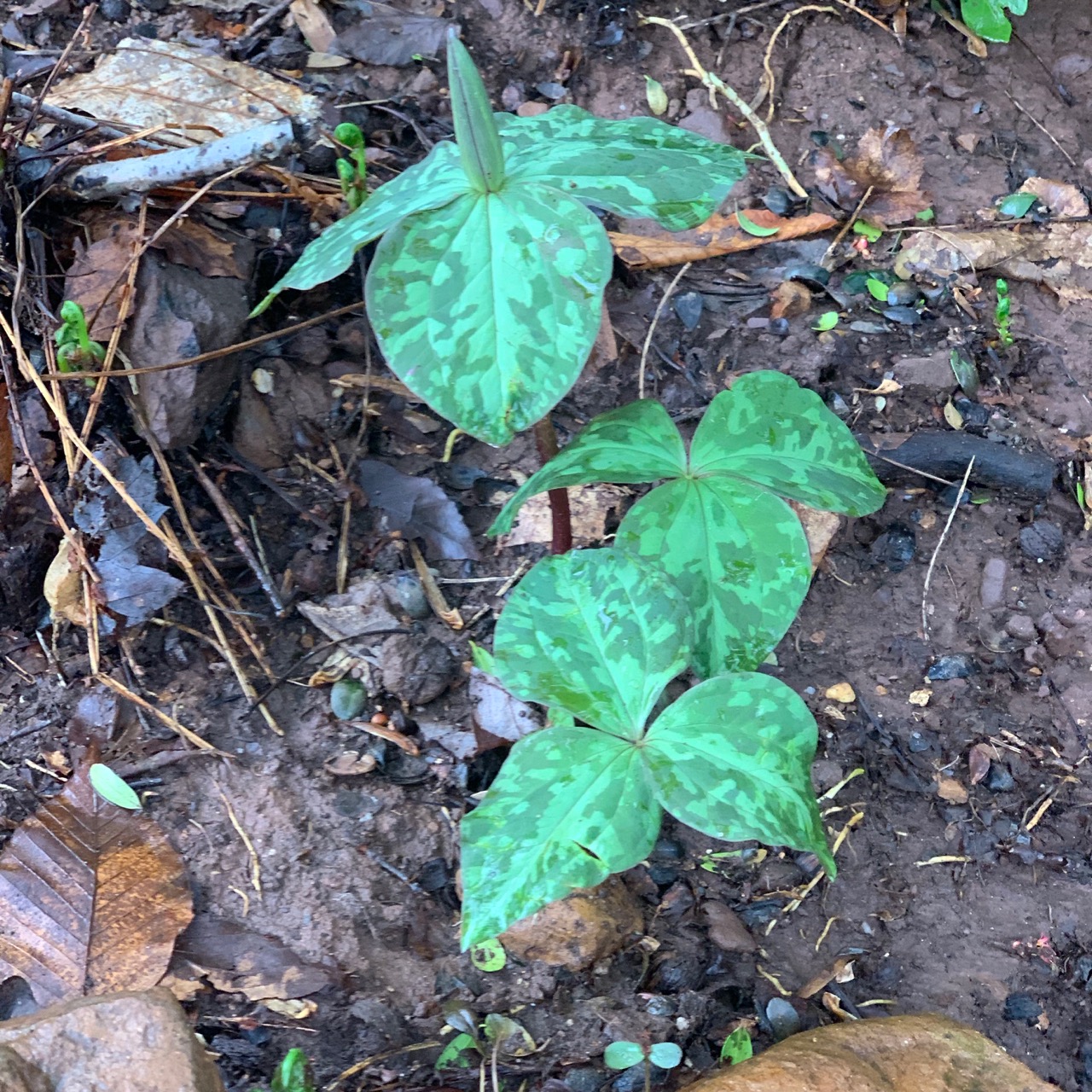 Gardening is something altogether different. I embrace the amateur nature of the term, its lack of regard for academics and high art. These things don’t matter anymore. We all know this. But sticking your hands into the dirt every day does. Growing things for a particular area that you know well does. It’s not something you hire someone else to do, it’s something you do yourself.

Gardening is a massive investment of time. Learning plants takes time. When I started I didn’t know Virginia Creeper from poison ivy and took the advice of a friend who suggested we pull it up too. What a mistake, only now is it coming back to cover bare spots. Plants take time, a lot of time. You don’t just put them in the ground and walk away. By their nature, they grow and they grow slowly. One reason I plunged headlong into gardening is that I realized that the temporal nature of the project meant anything I did now would only start paying off years later. There are things I am doing now that won’t have real impact for a decade or two.

After three years of intense gardening, I am only beginning to understand how a half acre garden on the periphery of New York City can be radical in its own way. This hit home to me last night. Notwithstanding their previously dwindling populations, the fireflies came back in force this year. My sixteen year old daughter and I sat on the chairs in our back yard, amidst all the things that I had planted, and delighted in them. Planting pine trees, letting debris in the woody area of the property rot and offering unmown micro-meadows seems to have done the trick. 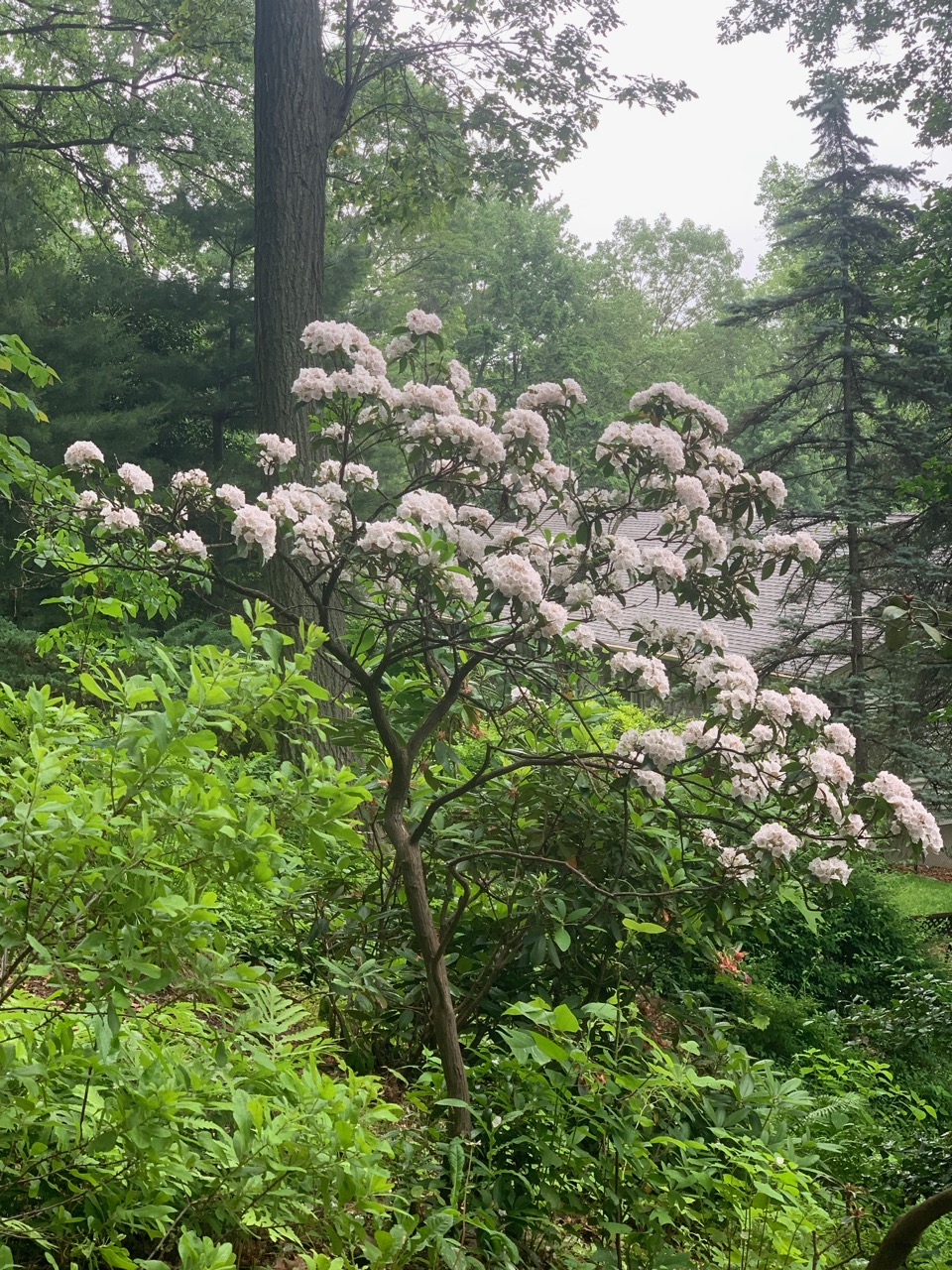 A native Mountain Laurel (Kalmia Latifolia) bloomed in early May this year.

My goal is to build a contemporary suburban pleasure garden, a place to restore some measure of peace to my family, friends, and myself even in a world gone mad. Logic is gone, we held its funeral years ago. In its stead is the raw anger of Brett Kavanaugh on one side and “woke” folk on the other racing each other in a doomsday death spiral. I have little time for that here, where I have gone, just as Diocletian turned to tending his cabbages after retiring from Emperor. My garden is a spiritual place, far from any church and its tired old songs. It stems from an earth-centric spirituality, a celebration of the cycle of life in its raucous abundance, drawing from warring pagan forces of soil, sun, and rain, not of some angry, white-bearded man-god better suited to faraway desert lands barren of living things. I have learned a lot about botany and horticulture, but I have also learned that these things have limits. I am after the deep connection with the living that science denies too often.

I have embraced the native plants that belong to this place, this town of Montclair, New Jersey, but I haven’t embraced the native plant movement and its assumption of original sin, guilt, and the rejection of pleasure. It’s merely more Protestantism in disguise and I read to much Nietzsche in college to revel in guilt. I don’t want to fill my yard with a patch of weedy-looking things. I am not pretending that I will restore a long-vanished landscape, nor do I assume to be primarily working for the pollinators or wildlife (although I did think about the fireflies a bit). Rather, I see such benefits as byproducts, just as habitat destruction and the spread of invasive species have been byproducts of recent landscape design. We can design byproducts into our plans, think about the side effects we want even as we create something for ourselves.

With this in mind, my plants are grouped in terms of the native plant communities indigenous to this place—meadows, woods, moist, dry, sun, and shade—along with a small grouping of native and non-native plants that traditionally have been identified with restorative properties (a “physick garden”) and a few food-bearing plants (sadly, the lack of controls on deer make my dream of a self-sustaining lifestyle difficult here).

A non-native in my “physick garden,” Borage (Borago officinalis), which makes for an excellent addition to cocktails and is possibly the failure that I lament the most this season. The four foot tall plant fell over and died this week, its lower stem rotten, the victim of too much water early in the season.

I set out to make this garden as a personal project, but I’ve begun to think that it may be more than that, that this project could eventually serve as a model for a new suburban landscape. There is so much land here we could turn to our advantage and yet most of it is a green desert, bereft of both biological diversity and visual appeal. A painful aspect of learning what can be achieved with gardening is that it opens your eyes to the ugliness of most properties. Sad houses are bracketed by sadder yards, at best a forlorn tree or two sits in an unused front lawn, some tired mop-headed hydrangea compete with invasive barberry and euonymous amidst a sea of black-painted “mulch,” all of which telegraphs nothing more than the property owner’s laziness. The lack of intentionality boggles the mind, as does the poverty of it all. 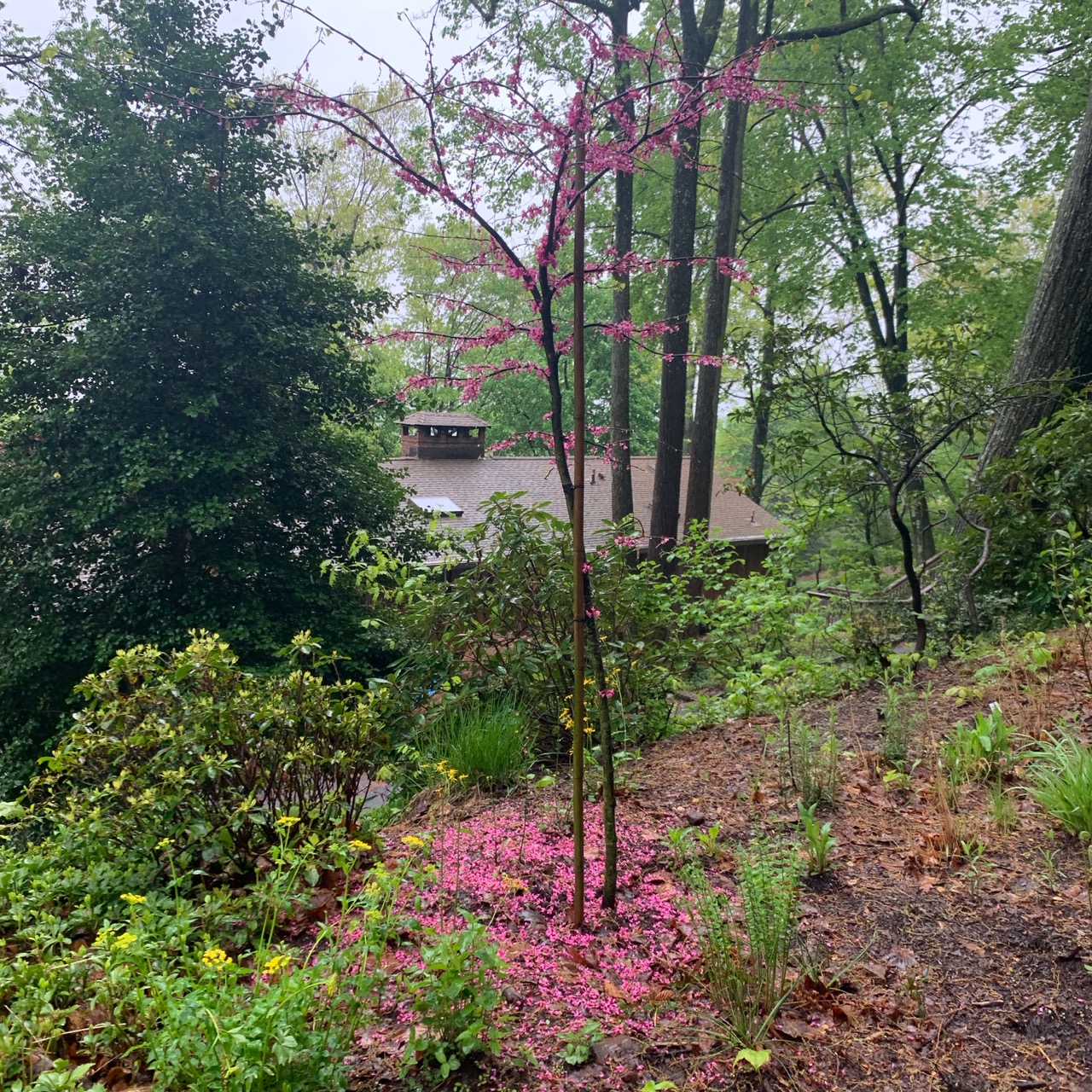 Early May and our Eastern Redbud (Cercis canadensis) has lost most of its flowers, carpeting the ground around it up by Highland Avenue. It is July now and the ferns and grasses near it have come in thick.

In the last three years, I have planted some thirty-eight trees on this 1/2 acre, all but three of which have been native (two are apple trees and one is a Norway spruce that my daughter received on arbor day at her school). These species——Carolina Silverbells, White Pines, Magnolias, Paw-Paws, Eastern Cypresses, American Hazelnuts, Redbuds, American Dogwoods, and so on——are a mix of understory and canopy trees, nestled in amidst the tulip-beech-oak canopy that defines the edges of this property. I spray religiously with Deer Out, a non-toxic mix of cayenne peppers, peppermint and eggs and that seems to have largely discouraged the ravenous deer in this suburb. I have let many seedlings thrive where they fall, helping in reforestation. I have planted dozens upon dozens of bushes, at least fifteen native rhododendrons alone. Native perennials now dot my yard, with woodland ephemerals tucked wherever I can find a place for them and ferns——relics from the Carboniferous period when giant dragonflies the size of hawks flew about——by the hundreds. Even a few lycopods, perhaps the most alien and oldest form of land plants, have managed to find homes here. Where before there had been mulch or bare ground, now something grows. Still, the property eagerly absorbs as many plantings as I can throw at it. 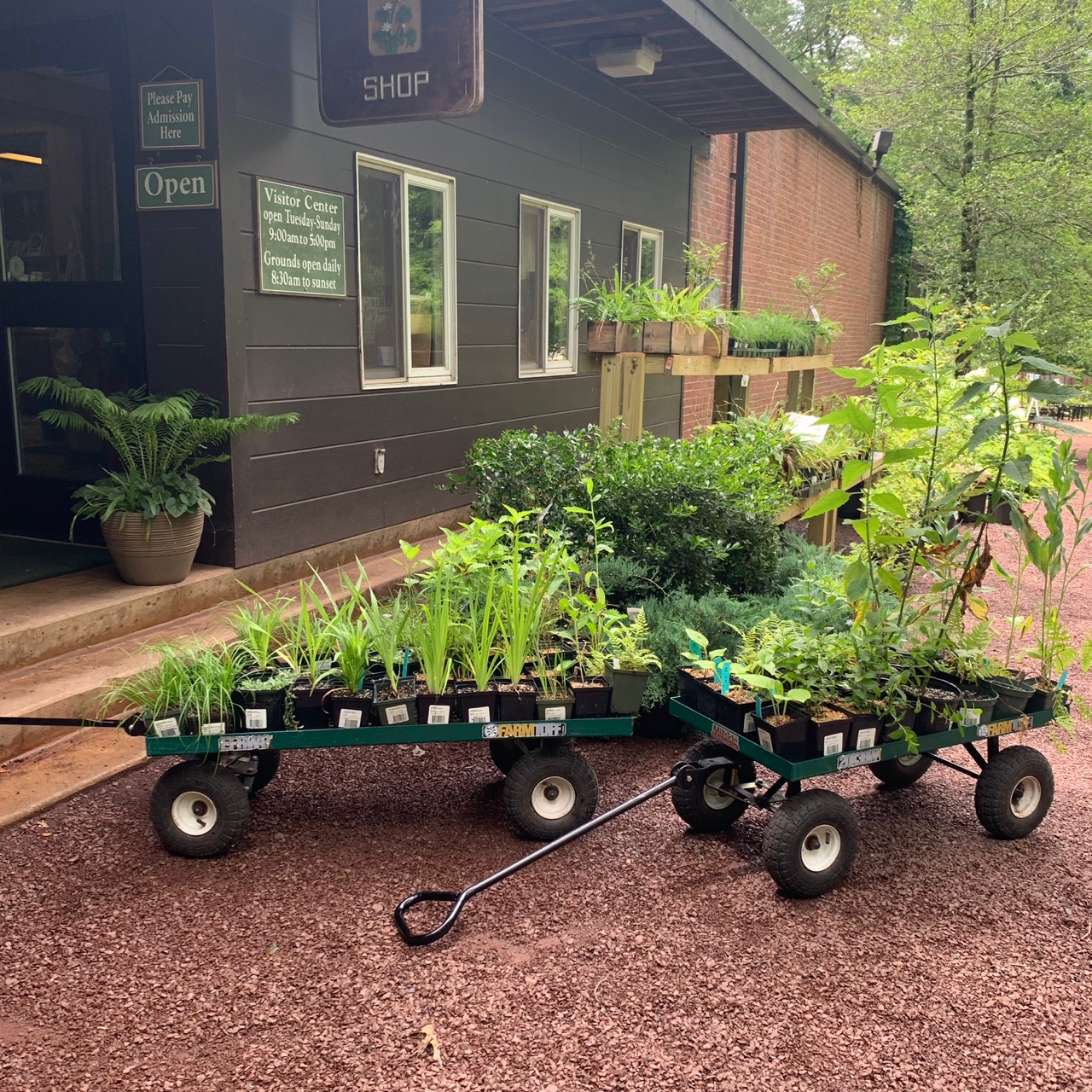 A recent haul. Two carts of native plants purchased on June 25th from the Bowman Hill Wildflower Preserve in New Hope, PA. It would be lovely to find natives from sources closer to home, but there are no nurseries that grow from local stock any closer and the price is right.

But my race against time this summer has run out. It’s too hot and dry to plant more for now. I’ll have to wait until fall, weed out the invasive plants that infest my land, products of criminal nurserymen and heedless neighbors, and work on my other projects. Perhaps I’ll even blog from time to time, or work on my book and the other things. Soon enough, fall will come, and with her cooler nights and, I hope, quenching rains, another planting season will come.