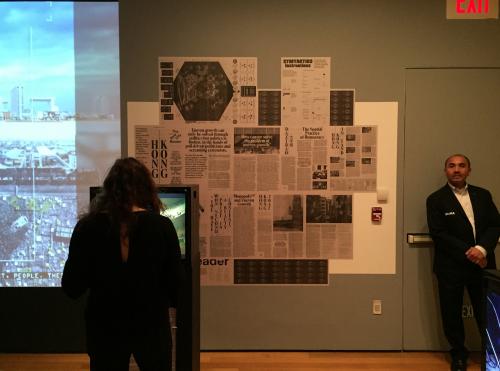 The Museum of Modern Art’s “Uneven Growth: Tactical Urbanism in Emerging Megacities,” curated by Pedro Gadanho opens this week and the Network Architecture Lab had the opportunity to do a project for the show and respond to the question Pedro posed to us: “how can architecture solve the problem of uneven growth?” I am going to explore the show in a few blog posts, beginning with this one, which addresses our overall conception for the show. Tune in tomorrow to find out why we developed the game SYMTACTICS as part of our contribution.

Pedro assigned us the city of Hong Kong to investigate, pairing us with MAP Office (Laurent Gutierrez and Valerie Portefaix), a local office operating between the realms of art and architecture. Projects for the show were intended to be collaborative and both teams soon understood that the best way we could produce a collaboration was to respect the difference between our approaches and create a dialogue. MAP elaborated on a poetic project that they had already begun developing prior to the show, “Hong Kong Is Land” in which they created a series of imaginative drawings representing artificial islands, each of which, Calvino-like, corresponded to conditions that they identified within the landscape of greater Hong Kong.

Our own approach was a bit different. In considering Pedro’s question while touring Hong Kong, the Netlab team on site (Jochen Hartmann, Robert Sumrell, and I) wondered if it was really possible for architecture to solve the problem of uneven growth. And, no matter how much fun tactical urbanism can be, wasn’t its DIY approach to urbanism just another neoliberal tactic deployed in support of the long war against governments providing services and solutions to problems, e. g. sending food trucks to Ferguson? Isn’t tactical urbanism, as Oli Mould suggests, just the latest iteration of the “creative city”? “Yes, but…” was our answer. And that but is that tactical urbanism doesn’t have to set out to solve minor problems, it can set out to solve big problems, by allowing architecture to engage with politics. Specifically, we realized that it was, yet again, time to revive the New City Reader and to understand that our own contribution would be to think of our role (two architects and an architectural historian) as public intellectuals, creating a tactical intervention in the museum to get ideas across. For as I constantly have to remind people, the Network Architecture Lab is not and has never been a mock-startup, rather it is a think-tank devoted to working with students, recent graduates, practitioners, and individuals in other fields on the problem of networks. In other words, if neoliberal politics worldwide have resulted in changes in taxation that have encouraged uneven growth, then our project set out to solve the problem of uneven growth politically, to reach out to the visitors at MoMA and to all of you to find ways to activate the public realm to bring the question of uneven growth to the table, both at MoMA and in our homes. As a newspaper of public space, the New City Reader claims to do precisely that, to tactically intervene in space in order not to produce a rant, but rather to provoke discussion, in this case discussion about uneven growth in Hong Kong and beyond.

Instead of writing a lengthy blog post on these matters, it seemed best to simply introduce the editorial that I already wrote for this edition of the New City Reader. You are most welcome to read the entire New City Reader here, or pick up your free copy at MoMA, should you be in the New York area (warning, we only printed 23,000 copies, which, over the course of the show means a hundred a day to give away; they will reputedly be refreshed in the morning).

How can we solve the problem of uneven growth?

The Umbrella Revolution’s first goal is a directly representative democracy, but it also expresses deep concern about uneven growth and the doubts citizens have that Hong Kong’s government will adequately address that problem.

Hong Kong is a city of extremes. While the International Monetary Fund lists Hong Kong as having the seventh highest per capita income in the world, the city also has the highest income inequality of any developed city in the world, even before considering the habit of wealthy families in China to understate their income. Although immigration to Hong Kong has become virtually impossible, migrant workers come to Hong Kong on visas with specific expiry dates, severely limited rights, and no opportunity to settle. These workers form a permanent underclass of temporary non-citizens, whose lack of rights is underscored and exacerbated by income disparity. Hong Kong now has one of the world’s lowest birth rates. But the greying of Hong Kong doesn’t mean that the city is growing less unequal. On the contrary, the elderly face a precarious existence, and if they are lucky enough to have younger family members, the latter will be financially crushed by the burden of taking care of them. Add growing danger from climate events due to global warming and Hong Kong is a post-apocalypse in the making. But Hong Kong is only a model city, a few years ahead of the game due to extreme growth. All of us face this future, if we can make it that far.

Whether in Hong Kong, New York, or just about anywhere, every day we are reminded of the challenges posed by uneven growth and rising inequality. Real estate prices in global cities are rising stratospherically, even as other cities are shrinking and being economically gutted: this year Detroit has already shut off water to over 27,000 poor residents who have fallen behind on their bills. In the megacities that this show focuses on, wealth and poverty coexist. As apartments costing tens of millions become normal, the middle class finds itself rapidly joining the poor, working short term jobs with no benefits, trading savings for debt, hoping that not to get sick or disabled. When we are lucky enough to have jobs, we pretend that a lack of job security makes our lives more fun, that moonlighting keeps us fresh, that eighty-hour work weeks show how much we love what we do, that we love tiny spaces, that we are most at home in hotel rooms or jet planes, and that our bodies aren’t destroyed by this existence.

How can we solve the problem of uneven growth? Not by neoliberalism, with handouts from NGOs or Kickstarter-style funding, but through politics. If political systems worldwide appear thoroughly broken, political change—as the Umbrella Revolution reminds us—is the one hope we have left, futile though it may be.

As a tactical intervention, the New City Reader begins with a simple premise: we observe that one of the challenges to political action today is the atomization of the public and our resultant inability to talk to each other about politics except by clicking a thumbs up or thumbs down button, political discourse becoming a matter of rants. If the Umbrella Revolution calls for change, we also call for dialogue between people in the streets, or the galleries, about change. What if we take a newspaper and, in the manner of the Chinese Dàzìbào, put it up on a wall to be read? We were asked to make something for museums in New York and Vienna, but why not take this idea and bring it elsewhere? Why not cover Hong Kong with Dàzìbào? The original Dàzìbào were made by hand and even large format plotter prints don’t cost a lot of money. Don’t just read the paper, make one of your own! What if we read it, what if we cover the archipelago of global cities in newsprint?

Along with a set of articles looking at Hong Kong today and in the future, we’ve included SYMTACTICS, a free board game in which you fight uneven growth through tactical urbanism. Much as building a model of a building allow us to see it more clearly, a game can reveal the particulars of a situation. Just as the New CIty Reader is intended to provoke discussion, a board game to be played with family and friends inevitably provokes conversation. If we can start a discussion we have hope for change.

kazys varnelis, ph.d. conducts transdisciplinary research and practice. trained as an historian of architecture, he is also an artist, curator, and designer.

kazys varnelis, ph.d. conducts transdisciplinary research and practice. trained as an historian of architecture, he is also an artist, curator, and designer.